I was going to jump into the red cup fiasco. I started a post last week after first becoming aware of the (non) issue when someone on Facebook shared this article from AllenBWest.com entitled, SHOCK: Starbucks accused of ‘Christian Cleansing’ after latest move… The move, of course, going with plain red cups this year in lieu of festive ornament, star, or snowflake laden cups as in years past for the holiday season.

Oh, good gravy. My eyes rolled back in my head before I even read it. It quoted an earlier article by many conservative Christians’ favorite news source, Breitbart, which quoted a British politician, and two people from far right Christian publications in Great Britain, all of which denounced the move as politically correct and anti-Christian.

The comments were outraged and predictable with people calling for boycotts or telling baristas their name is “Merry Christmas” to get it back on the cup. 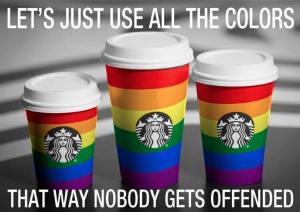 But very quickly, reason prevailed as more and more and more people spoke out on social media about how ridiculous the whole thing really is and how many other things actually matter. You would be hard pressed to find one Christian who is actually upset about Starbucks having plain red cups, at this point.

This week, the tide turned the other way and now I’m seeing an interesting twist in which I moan, “Oh, good gravy,” again.

I see many people speculating, as they are only seeing folks denouncing red cup boycotts, that the whole thing was started by the media to make all of us Christians look bad. Groan. Why? Why must there always be someone out to get us? Where does that fear come from?

Here’s the thing. Red cup outrage was started by the media, but not by that media. It was started by the right-wing media designed to give us a boogey man to loathe and fear which is the primary agenda of Fox News, Breitbart, Western Journalism, etc. They do it because it works. It keeps us coming back which keeps their click counts and ratings up and makes them lots and lots of money.

But for the Christian, it’s dangerous. It alters our perception of the world. It changes the way we view our neighbors. It distracts us. It will consume us.

In the middle of the red cup mess, my teen daughter came home from a weekend away. She recounted her experiences and she gripped me with this story.

Mom, I met this boy, *Caleb. We had to take him home after everyone left the bonfire. His mom is in the hospital because she had a heart attack. He tried to play it off like it’s not a big deal. It’s not her first one. She has breast cancer, too. His little siblings are staying with other relatives but he’s old enough to stay alone, so he is. I don’t know what’s going to happen to him. His dad isn’t around. She gets out of the hospital tomorrow and a cousin is going to take him to pick her up. We prayed for him before he got out of the car, but there was nothing else I could do.

For too long, we’ve been lulled into thinking that standing up for righteousness means demanding the right to pray after a football game or organizing protests to keep the Nativity on the courthouse lawn. We’ve been duped into believing that righteous anger gives us license to get mad at people who disagree with us. We’ve somehow given the Constitution of the United States equal weight with the Bible and gotten America confused with the Kingdom of God.

Voting, carrying signs, expressing anger and disgust, slapping on bumper stickers, spouting our opinions…of course we default to those things to prove our “righteousness.” They’re easy.

Learning to lay down our lives for someone else? Living as a servant to all, not just those in our circle? Loving, valuing, caring for our neighbors as we do our selves? Not so easy.

Standing up for righteousness requires me to stop being selfish and to put someone else’s needs above my own. It means looking around for teens whose families are in crisis. It could mean I need to rake a neighbor’s lawn, take a meal, visit the elderly, provide childcare for a few hours, run to the store, phone a friend, send a card, pray with a stranger, sponsor a child, serve meals at the shelter, take sandwiches to the homeless, etc, no matter that my life is crazy busy right now and it’s the holidays and I am broke and I have a million reasons why this is a bad time.

It may mean I do something even more radical like adopt another child, donate a kidney, clean out my savings for someone else’s adoption, move to the inner city, allow a pregnant teen to sleep on my couch, or whatever else He’s put on my heart to do.

Standing up for righteousness is walking in love. It’s living with an open heart to love the needy, open eyes to see the needs, and open hands to fill them.

Frankly, it’s so easy to write these things, so easy to intend them. But really, in the hustle and bustle and stress of life, it is stinkin’ hard to walk it out. I don’t know if it’s my ADD that distracts me so much or if everyone has wonderful intentions on which they rarely follow-through, but I can tell you that the first list is really difficult for me. The second is a little more palatable for some reason. I guess because I am a visionary and prone to moments of grandeur, I am more likely to donate a kidney than rake somebody’s lawn. BIG I can do. (I’m great in a crisis. Daily irritants send me running for Valium. Go figure.)

But we can’t just do big things for people and call it love. Often the initial act of the big thing isn’t really love at all. It gets the most attention and glory, but doesn’t require nearly the sacrifice as the fall-out. One or two big things over the course of our lives don’t get us out of the daily sacrificing of love, I’m sorry to report. One and done is not in God’s vocabulary.

What does all of this have to do with red cups?

I Peter 2:15 says, “For it is God’s will that by doing good you should silence the ignorant talk of foolish people.” No matter where the ignorant talk originates, all we need to do…is good. Be a light in the darkness. Love your neighbor. Let your graciousness be known to everyone. Be quick to listen, slow to speak, and slow to become angry. Do nothing out of selfish ambition; instead, value others above yourself.

Silence the ignorant talk by doing good. There is grace for that.

(Oh, and just today, Breitbart is still calling this a “war on Christmas”. If you believe there is such a thing, I highly recommend this post and handy flow chart for your reference.)

4 thoughts on “Silence the Ignorant Talk”